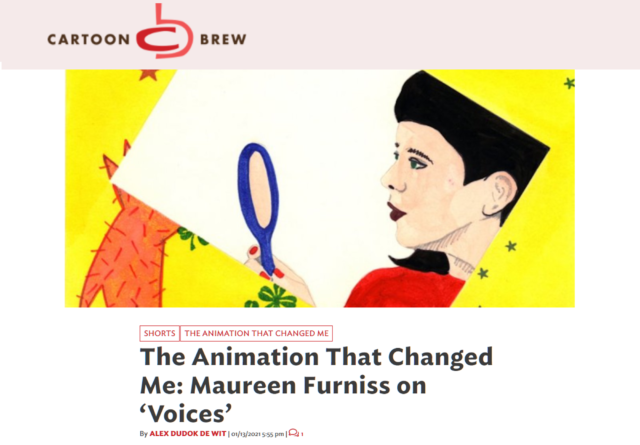 Co-director of the Experimental Animation Program Maureen Furniss discusses the impact of “Voices” (1985), a short film by fellow CalArtian Joanna Priestley (Film/Video MFA 85), in Cartoon Brew’s latest installment of “The Animation that Changed Me.”

Furniss recalls first seeing “Voices” around the time of its release at La Jolla Museum of Contemporary Art in San Diego, Calif. She attended the screening after winning tickets to an early iteration of Spike and Mike’s Festival of Animation from a radio station. The four-minute, 16 mm short film depicts a rotoscoped animation of Priestley discussing “very un-cartoony topics” as she morphs into a variety of animation styles.

“I generally credit ‘Voices’ with launching my career,” Furniss was quoted in the article. “I knew nothing about independent animation, but I thought, ‘I could do that.’”

Furniss, at the time a graduate student in a live-action film program at San Diego State University (SDSU), went on to launch a study titled The Current State and Future of American Independent Animation in response to the lack of literature about the distribution of independent films. Her research continued as a PhD student at University of Southern California (USC), where she again encountered the issue of studying animation “in a live-action-oriented program.” Throughout her studies, Furniss experimented with animation in a series of personal projects. Learn more about these and more about Furniss’ pick in the full article on Cartoon Brew.

Furniss is the author of titles including The Animation Bible, Art in Motion: Animation Aesthetics, and A New History of Animation, and is the founding editor of Animation Journal. Furniss is also a founding member and past chair of the board of the Society for Animation Studies, and has been recognized for her contributions to the field of animation from publications, film festivals, and the Hollywood chapter of ASIFA (The International Animated Film Society).