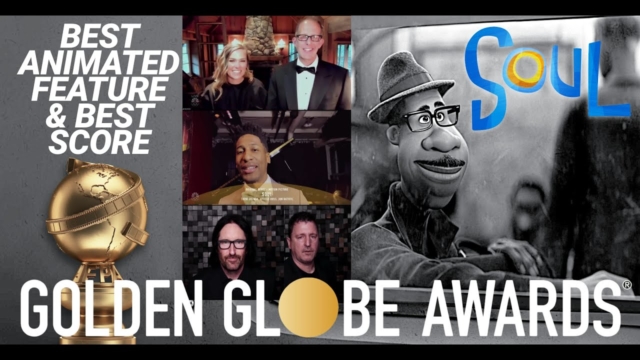 Directed by Pete Docter (Film/Video BFA 90) and co-directed by Kemp Powers (One Night in Miami), Soul takes on some of life’s most pressing questions as it follows Joe Gardner (Jamie Foxx), a New York jazz pianist who suddenly finds himself trapped in a limbo space between Earth and the afterlife.

“Little did we know making a film about jazz would teach us so much about life,” Docter said in his acceptance speech for Best Animated Feature alongside producer Dana Murray. “We can’t always control what happens in the world, but, like a good jazz musician, we can try to turn that into something beautiful.”

Powers, who was not present with Docter and Murray, offered his acceptance speech through a video that Docter displayed to the camera via his tablet.

“Being able to tell a universal tale that explored the meaning of life through the prism of a Black man’s experience was a special honor,” said Powers. “And though the details are specific, I really do believe our story is universal.”

Soul was nominated for Best Animated Motion Picture alongside two other CalArtian-directed films: The Croods: A New Age was helmed by Joel Crawford (Film/Video BFA 06), and Over the Moon by Glen Keane (Film/Video 74).