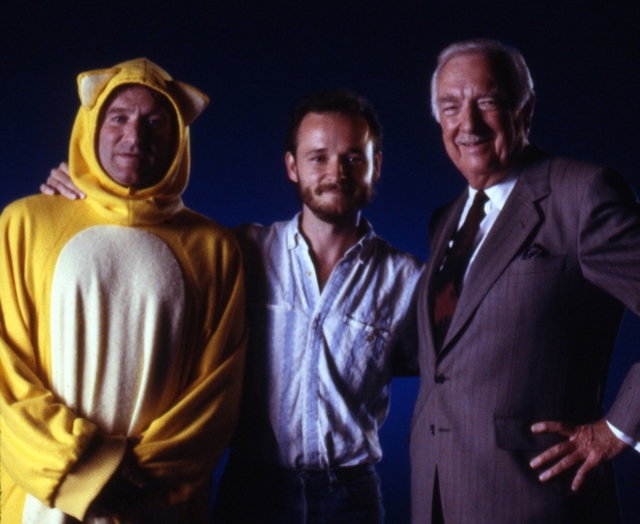 Robin Williams, Walter Cronkite, and Jerry Rees on the set of “Back to Neverland.” | Image courtesy of the artist

On Thursday, March 18, director, producer, and writer Jerry Rees (Film/Video 77) discusses his prolific career in a visiting artist presentation for the “CalArts Animation: The Early Years” virtual lecture series, which is open to CalArts students, faculty, staff, and alumni.

As a high schooler, Rees was mentored by animator Eric Larson, one of Walt Disney Studios’ “Nine Old Men.” Rees studied at CalArts after being awarded a Disney Scholarship, serving as a teacher’s assistant for the Institute’s famous inaugural Character Animation class. After two years, he and other CalArtian animators—including John Musker (Film/Video 77) and Brad Bird (Film/Video BFA 76)—went on to join the studio as Disney feature animators. Reese eventually worked his way up to visual effects supervisor on the cutting-edge sci-fi classic TRON (1982).

“I made flipbooks as a kid, and as I got older, I started seeing how many stories you could tell,” Rees was quoted in a 2011 interview with MovieMaker. “Then it stopped being a novelty and became a storytelling tool. I remember in high school our teacher asked us, ‘Where are you going to be in five years and 10 years?’ I remember writing down: ‘In five years I’ll be in film school, and in 10 I’ll be working at Disney.’ And things actually turned out that way.”

As a director, Rees’ theatrical credits include the 1987 animated musical The Brave Little Toaster (on which he also served as a writer) and The Marrying Man (1991). He also also wrote and directed “Back to Neverland,” a 1989 short film starring broadcast news anchor Walter Cronkite and actor and comedian Robin Williams. The nine-minute short features Cronkite guiding an enthusiastic Disneyland tourist (played by Williams) through Disney’s traditional hand-drawn animation process, an adventure that leads them through Peter Pan’s Neverland.

Rees was also responsible for the direction of a record-setting 16 transmedia Disney Theme Park attractions in Anaheim; Orlando, Fla., Hong Kong; and Paris. The interactive experiences, which include the award-winning CinéMagique (THEA Award for Best Attraction) and Animation Magic (THEA Award for Most Innovative Use of Technology), spanned multiple formats, including Showscan, Hi-Res Digital, and in-theater illusions. Rees also currently serves as a PH Executive Research & Development Imagineer at Walt Disney Imagineering (WDI).