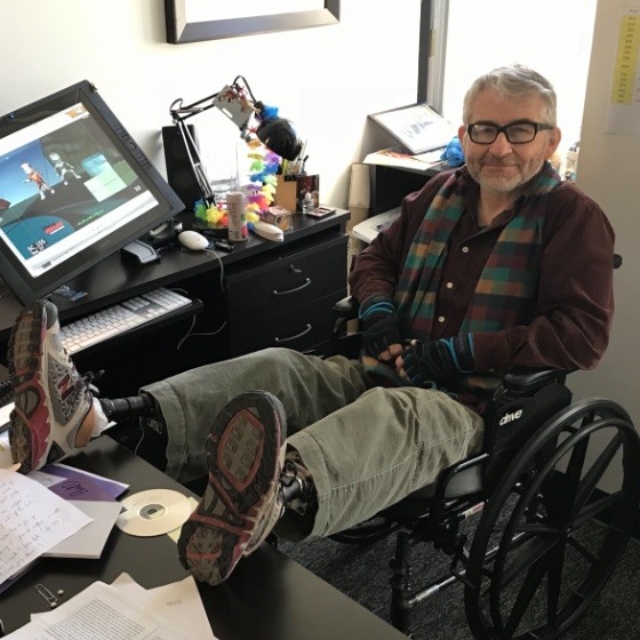 Award-winning director and producer Paul Demeyer (Film/Video MFA 77) is the latest presenter of the CalArts Animation: The Early Years virtual lecture series on Thursday, March 25. The series is open to CalArts students, faculty, staff, and alumni.

Born in Bruges, Belgium, Demeyer studied animation at the Royal Academy of Fine Arts of Ghent. He went on to study at CalArts and received his MFA in 1977; around this time, his short film “The Muse” (1976) was awarded the Student Academy Award in Animation.

Upon graduating from CalArts, Demeyer returned to Europe to kickstart his career directing commercials, storyboarding, and animating for Belgian television. After a stint at Luxembourg-based RTL Productions, Demeyer moved to London to direct commercials with Richard Purdum Productions. In 1988, he produced and directed “The Goose Girl,” an animated short inspired by a Brothers Grimm’s fairytale. “The Goose Girl” won the Best Animation for Children – Not for TV Series Award at the 1990 Ottawa International Animation Festival, and the Best Children Film Award at the 1989 Los Angeles International Animation Celebration.

Demeyer returned to Los Angeles in 1993 to join Klasky-Csupo, an independent animation studio founded by CalArtian Arlene Klasky and Gábor Csupó. There, Demeyer directed award-winning episodes of the groundbreaking television series Duckman, and served as creative director on Nickelodeon’s Rugrats series. Demeyer continued to leave his mark on the franchise as it expanded. He is credited as a sequence director on The Rugrats Movie (1998) and directed the feature film Rugrats in Paris (2000).

In 2015, Demeyer was interviewed by the Los Angeles Times about his decades-long experience with diabetic retinopathy, which causes damage to retinal blood vessels and is recognized as a “leading cause of blindness in American adults.” Demeyer described his world as “life through a keyhole,” but attributes his visual impairment as something that has made him a better director: “The narrowing of my view,” he said, “has made me look at the broader picture.”

Demeyer’s recent television credits include directing episodes of Disney’s Miles From Tomorrowland, and Disney Jr.’s The Rocketeer. As an educator, Demeyer has taught at CalArts, Liverpool Poly, West Surrey School of Art and Design, and USC.