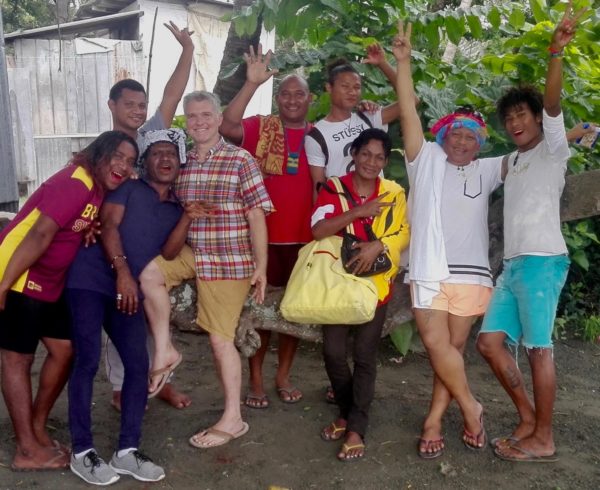 Documentarian and CalArts alum Tim Wolff (in plaid shirt) is pictured with some of the people who appear in his film, ‘I’m Moshanty. Do You Love Me?’ | Image: Courtesy of the artist

When Tim Wolff (Film/Video 86) was studying at CalArts in the mid-1980s, his intention was to make edgy narrative dramatic movies that would have a strong impact. Nearly 40 years later, Wolff has never directed a work of fiction, but the films he has made have sent him around the world with U.S. State Department support, reaching a wide audience, opening many eyes, and telling compelling stories—as a documentarian.

Like many other directing students from the early years of the School of Film/Video, Wolff says he learned many important lessons from Alexander Mackendrick, founding dean of the school. But visits by independent filmmakers made the biggest impression, including that by documentary filmmaker Les Blank, who screened A Poem is a Naked Person, his movie about musician Leon Russell, years before it was released. “At CalArts, we were exposed to so many extraordinary moments of learning,” Wolff says.

Wolff’s first big break came in 1997, when he attended a Radical Faerie gathering in Tennessee, celebrating queer consciousness, and met Barry Shils, director of Wigstock: The Movie, a 1995 documentary about the largest drag performance festival. Shils was then directing episodes of the HBO documentary series Real Sex. Wolff impressed Shils with his film knowledge, and soon pitched him an idea for HBO about the mildly erotic circus known as Bindlestiff Family Cirkus. Shils liked the idea and hired Wolff as producer. Wolff produced another HBO short for Shils, and then travelled with Shils to Haiti to film a documentary on refugees who had been returned to Haiti by the first Bush administration, many of whom were immediately jailed in their homeland. “I was grateful to be entrusted with such a trip and footage,” Wolff says. “Working with Barry gave me confidence.”

While working for Shils, Wolff continued on with his long-envisioned personal film project. In 1993, while living in New Orleans, he attended his first Mardi Gras ball hosted by the all-gay Krewe of YUGA, including men who had been battling for gay rights in the South—and suffering the consequences—for decades. “Every other day of the year, public assembly for gay people in New Orleans was illegal, but none of these laws were enforced on Fat Tuesday,” Wolff says. The result was that on Mardi Gras, the gay community of New Orleans could exult in pageantry and elaborate costumes and feel safe.

The gay Mardi Gras ball had originated in the late 1950s, and by the ’90s, many of the founders were senior citizens. Wolff had thought about making a film about the event for more than a dozen years, before his partner tired of hearing him talk about it and challenged him to finally make the film. The result was Sons of Tennessee Williams, released in 2011. It blends footage of the 40th anniversary of the event, archival footage, and interviews with 20 of the men who were instrumental in its history. More than a celebration, it’s a social historical documentary, including discussions of the raids and roundups that were happening years before the 1969 Stonewall riots of New York’s gay community. Since its theatrical release, the film has appeared in 40 film festivals, has screened on PBS, Netflix, iTunes, Amazon, and Hulu, has been included in the collections of 250 libraries, and has been translated into 12 languages.

In 2013, Wolff applied to screen Sons of Tennessee Williams through a State Department program that promotes U.S. culture around the world. The film was selected for a screening later that year at the U.S. embassy in China as part of the Beijing Queer Festival, hosted that year by the embassy. The State Department paid for Wolff to attend and speak about the film, and then sent him to four other cities in China to present the film. China had shut down the festival each time it had been attempted over the previous 12 years. But with the support and protection of the State Department under Hillary Clinton, who had made LGBTQ rights a priority, screening films about gay life in a restrictive country like China became possible.

Following his trip to China, Wolff screened the film through the State Department in 11 other countries, choosing locations where the gay community was deep underground and where his film might have the most impact, including Costa Rica, Myanmar, and New Guinea. After his screenings, he would tell his story about the making of the film, but also give workshops on how to use independent films as a tool for human rights progress.

“In Seoul, I realized that I was bringing activists together with embassy officials,” he says. “Someone from the LGBTQ community would meet someone from a Korean TV network and conversations would start. I was breaking territory and boundaries. In Vietnam, the Communist party approved the screening as part of a U.S. cultural exchange. In Myanmar, I had government reps at my screening. There was a heated exchange between people from the LGBTQ community and government officials and law enforcement. I don’t know if these officials were there to spy, but they did engage in the post screening Q&A, acknowledging the people in the room.”

The trips also provided Wolff with an opportunity to film local gay communities. “In most cases, these are communities that have no representation in their local media. Zero,” he says. “Their governments can deny their existences, which they do.” While in Papua New Guinea, he heard about a transgender entertainer named Moses Moshanty Tau, who was a top celebrity despite the country’s history of violence against people from the LGBTQ community. He sought her out for an interview, and six months after the trip, Moshanty died of cardiac arrest on her 50th birthday. Wolff returned in 2018 to gather more material before completing the film, I’m Moshanty. Do you Love Me? The film has appeared in 28 international film festivals, collecting six awards. It has recently been released on Amazon Prime.

Wolff has several projects currently in the works, including a collaboration with the National Theatre of Papua New Guinea to produce a collection of monologues that address violence against women, casting actors whose lives have been affected by violence, and a plan to secure State Department support to travel around the world to help filmmakers complete their unfinished films.

“I push a philosophy that there is no longer an excuse to not make your movie because you can do every step of the process by yourself if you have to,” Wolff says. “No one is rightfully judging your human rights documentary for its production values anymore, if the subject matter makes up for it. Suddenly anyone who says to you, ‘finish that movie’ or even ‘start that movie’ is an ally.”