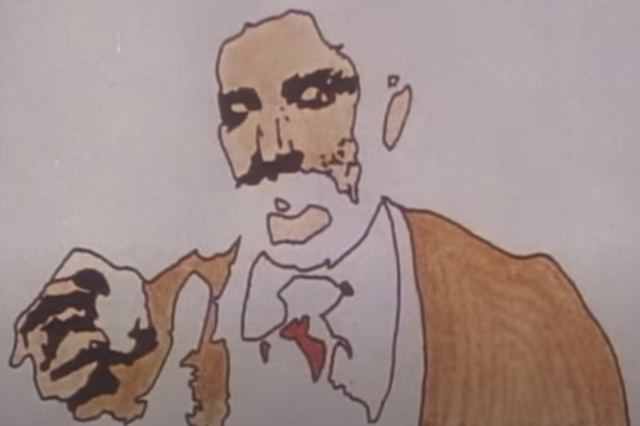 A screenshot from Gary Schwartz’s ‘Animus.’

A 2017 Essay’d profile characterizes Schwartz as a “perpetually moving whirlwind of creativity,” whose childhood was marked by a fascination in hand-drawn and stop-motion animation, as well as other nondigital animation techniques. He received his BFA in film animation The University of the Arts in 1979, followed by an MFA in animation at CalArts in 1981, where he created his Student Academy Award-nominated short film “Animus” (1982). The short utilizes pioneering English photographer Eadweard Muybridge’s walking man in a stop-motion fashion to guide the viewer through the history of animation, framing myriad animation techniques morphing into each other as it marches along the screen. The subtext of “Animus” is “the story of Schwartz’s migration from the east to west coast.”

Schwartz has gone on to produce, design, and direct animation for Disney, Sesame Street, MTV, Fox Television, The Corporation for Public Broadcasting, and others through his company Single Frame Films. In his class note for issue 7 of CalArts’ biannual alumni magazine The Pool, Schwartz mentioned that his stop motion film Spencer’s Slight Imperfect Peep Show AKA Micro-Burlesque was selected for the 2020 Ann Arbor Film Festival. In addition to film, his installations and kinetic cinematic sculptures have been exhibited in major galleries and museums internationally.

In 2016, Schwartz received a US Federal Title 1 Grant, which was established by President Lyndon B. Johnson in 1965 to bring arts education to “underserved populations.” According to a 2017 Animation World Network article, Schwartz went to a county jail to teach juvenile inmates about animation methods and techniques. Schwartz noted the difficulty in gauging his students’ reaction to the program—feelings and emotions are not spoken about freely in prison—but noted positive results:

The students looked stunned, Gary said, “transmogrified by the self-realization of their power to create.” The person heading the prison’s reformation program reported, “she couldn’t believe what I’d done.”

As an educator, Schwartz’s pedagogy emphasizes self-expression, imagination, and creativity, which he has noted as often overlooked in favor of technical instruction in filmmaking education. He is a frequent lab leader at the Tumo Center for Creative Technologies (TUMO) based in Yerevan, Armenia. A May 2020 article on the TUMO news site focused on a stop-motion animation learning lab he held, in which his teaching assistant described how he encouraged participants to think of animation as a dancer or musician might: “To choreograph our animation to the music and match the hits with visuals.”

Schwartz currently serves as a lecturer at the University of Michigan School of Art & Design.