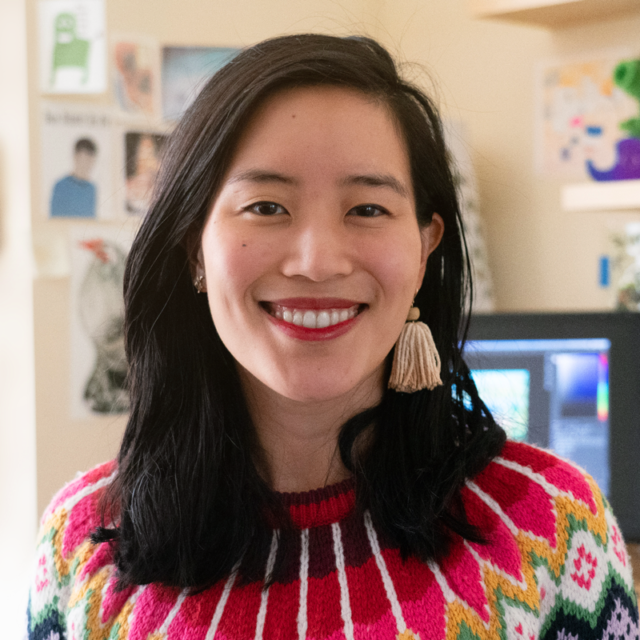 To prepare for the task of illustrating Bonnie Tsui’s newly released children’s book about the first woman to surf the massive waves at the Northern California surf break known as Mavericks, Sophie Diao (Film/Video BFA 13) took an active approach. But she was wise enough not to get too active. “I’d attempted to learn to surf once at Venice Beach, but the idea of people actually seeking out these massive 50-foot waves was wild to me,” she said.

Instead, Diao took a surfing lesson on the more moderate waves at Half Moon Bay and sketched the other surfers that she saw there. All of this helped her gain a better understanding the book’s subject, Sarah Gerhardt—a legend in surfing circles who has fearlessly ridden some of the world’s biggest waves.

An editor at the publisher Henry Holt first contacted Diao last year about illustrating the book, Sarah and the Big Wave: The True Story of the First Woman to Surf Mavericks. Having just illustrated Michael Karg’s I am the Wind in 2020, Diao was excited to take on this new project. “I was definitely intrigued by the topic and by Bonnie’s manuscript,” she said.

Typically the author and illustrator work separately on a book project, often not even speaking with each other during the process. Diao, however, wanted to get a feel for Tsui’s work and understand her frame of mind. “When I started working on Sarah,” Diao said, “I immediately followed Bonnie on social media; she’s an avid swimmer and surfer, and she would frequently post photos of herself catching waves before dawn and talk about her love of the ocean. I really enjoyed following along and getting inspired to work on the book.”

Beyond being a children’s book illustrator, Diao has done work for the Ad Council, Cartoon Network, Chromosphere, Disney TV Animation, and Pixar, to name a few. Her day job is Senior Visual Designer at Google, where she is an illustrator and art director on the team that produces Google Doodles, the temporary alterations of the logo that appear on Google’s homepage, often commemorating a holiday or a historical person or event. It’s a gig that began while she was still at CalArts.

“In my third year at CalArts, I was working in my cube when the Charles Dickens Google Doodle caught my eye,” Diao said. “I looked up who the artist was—Mike Dutton—and decided to send him a note congratulating him and asking him to look at my portfolio.” This professional correspondence eventually led to an internship on the Doodle Team. “I had a blast during those three months,” Diao said. “I had the opportunity to illustrate and animate Doodles for the London Olympics and other events, and then I returned full time after I graduated from CalArts.”

Diao has become a prolific Doodler over the past eight years. By her calculation, she’s created approximately 350 Doodles, including those recognizing the Lunar New Year and Earth Day, as well as honoring groundbreaking artists Dolores del Rio, Anna May Wong, and many more.

Like many artists, Diao’s interest in art began at an early age. Growing up, her family moved around a lot and Diao found solace in hobbies that she could take with her, such as drawing and reading. When she arrived at CalArts after high school, her development as an artist went into overdrive.

“I loved being around so many talented classmates and absorbing all the creativity on campus like the dancers stretching and practicing in the hallway, the sound of a piano floating down the hall, the didgeridoo player in the Main Gallery. And who could forget naked gamelan?” Her CalArts experience helped to launch Diao’s fruitful and eclectic career as an artist and she’s not looking back. Even if she sometimes has to pinch herself to believe where she is. “I’ve always wanted to be a writer and an artist when I grew up, and I’m amazed that it’s worked out so far!”