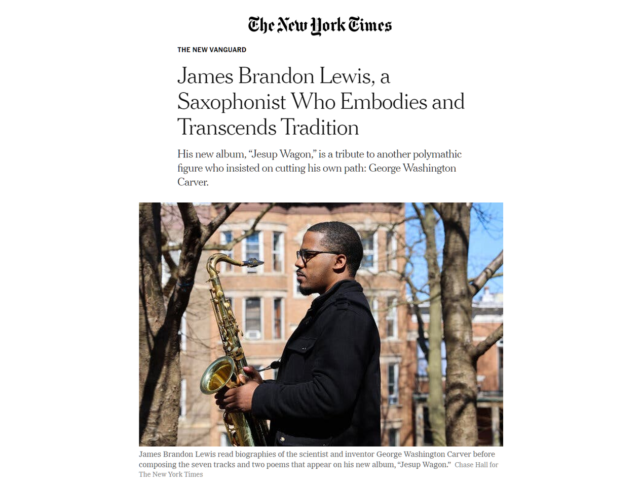 Saxophonist and composer James Brandon Lewis’ (Music MFA 10) and the Red Lily Quintet’s latest album Jesup Wagon (TAO Forms) has been featured by The New York Times, describing this latest collection as “some of the loveliest compositions of his career, built around overlapping ribbons of melody.”

The album pays tribute to the polymathic George Washington Carver (1863-1943), who, despite being “pruned by history” to a mere association with peanuts, was a scientist, inventor, botanist, artist, educator, and all-around “symbol of Black pride” during the brutal Redemption period of the 1860s and 70s. Jesup Wagon is named for the carriage Carver drove across the South during the time he established the agriculture department at Tuskegee Institute in Tuskegee, Ala.

More about the album from NYT:

Sometimes elegiac, sometimes bounding forward, the tunes on “Jesup Wagon” are some of the loveliest compositions of his career, built around overlapping ribbons of melody. On “Experiment Station” — its title comes from Carver’s nickname for his lab — an opening section of gesturally bowed strings and legato horns falls into a marching rhythm, led by Taylor’s drums. As Lewis unfurls his solo, the cadence comes apart again, reappearing only occasionally, in moments of fleeting cohesion.

The article also notes Lewis’ time at CalArts, during which he studied under drummer and Herb Alpert School of Music faculty Joe LaBarbera, trumpeter and former faculty Wadada Leo Smith, and late bassist and Jazz Studies Program founder Charlie Haden. Lewis’ album An UnRuly Manifesto (Relative Pitch Record), which was named one of the best albums of 2019 by DownBeat Magazine, was partially dedicated to Haden.

In 2019, Lewis was among the CalArtians performing at the Angel City Jazz Festival, where he played with his JBL Quintet. In 2013, Ebony magazine named Lewis as one of “7 Young Players to Watch,” featuring jazz musicians aged 30 and younger.