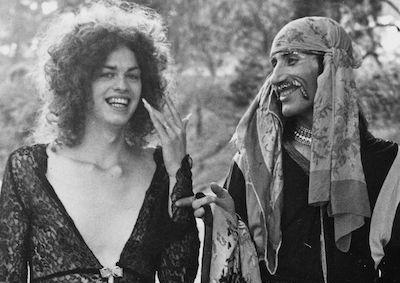 Curated by Drucker, the talk explores her fascination with “moving image historiographies of transgender people from across time and space,” according to the program. The screening opens with an excerpt from Pat Rocco’s Changes (1970), a documentary about Jimmy/Jenifer Michaels, a transgender person living in Los Angeles. Afterward, Drucker will share two more films with appearances by Jimmy/Jenifer Michaels: I Don’t Know (1970), and Hats Off to Hollywood (1972), which were both directed by Penelope Spheeris.

The program closes with a new restoration of Trans (1994), a documentary by Sophie Constantinou, and the short film At Least You Know You Exist (2011) by Drucker. Filmmaker Constantinou will join Drucker for the presentation.

Drucker is an Emmy-nominated producer for the docu-series This Is Me, as well as a producer on the Golden Globe and Emmy-winning series Transparent. She has performed and exhibited her work internationally in museums, galleries, and film festivals including the Whitney Biennial 2014, MoMA PS1, Hammer Museum, Art Gallery of Ontario, MCA San Diego, and SF MoMA.