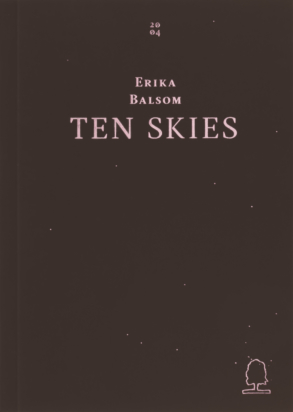 London-based film studies scholar and critic Erika Balsom explores “one of the great works of the American avant-garde” in Ten Skies (Fireflies Press). The book is named for School of Film/Video faculty James Benning’s 2004 film of the same name, succinctly described as “ten shots of the sky, each ten minutes long.”  The book’s launch is accompanied by screenings around the globe, including upcoming screenings in Melbourne, Australia and New York City.

Ten Skies is the second title in the Decadent Editions, a series by Fireflies Press of 10 books about 10 films, each corresponding to a year of the 2000s. School of Art faculty Sharon Lockhart shared the following testimonial:

Erika Balsom brings you from the film itself into the mind of the artist, through the history of experimental cinema, to philosophical musings and art historical scholarship, and back into Benning’s thoughtful imagery. Take this little book, put it in your pocket, and wander the landscape until you find the perfect spot to sit and read, pausing now and then to look at the sky.

A book launch will take place at the ACMI in Melbourne, Australia on Saturday, June 26 at 5 pm AEST, accompanied by a screening of Benning’s 2004 film 13 Lakes (ACMI’s originally scheduled screening of Ten Skies was cancelled due to COVID-19). The ACMI will also be hosting 16mm screenings of El Valley Centro (1999), Los (2001), and Sogobi (2002). The three films, which together form Benning’s “California Trilogy,” each feature 35 shots that “map the state, visualising its beauty while examining the politics of water and of ethnicity.” See event details below for individual dates and times.