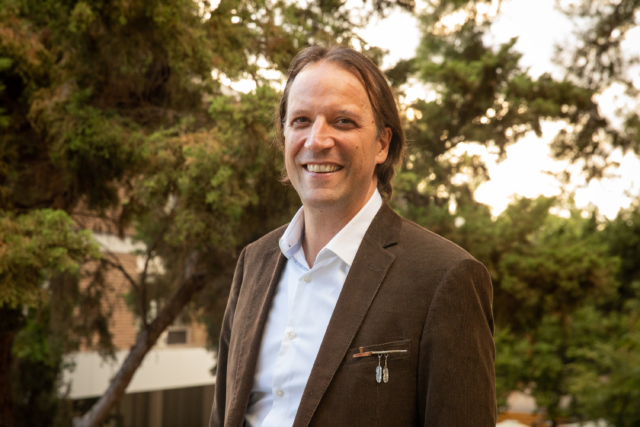 For Chad Hamill (Music BFA 93, MFA 97), becoming an ethnomusicologist was a natural outgrowth of his experience at The Herb Alpert School of Music at CalArts.

“Throughout my BFA and MFA studies, I immersed myself in musical traditions that took root around the world,” he said. That experience helped propel Hamill forward into his career. He went on to earn his PhD from the University of Colorado at Boulder and subsequently served as Chair of the Department of Applied Indigenous Studies and Vice President of Native American Initiatives at Northern Arizona University in Flagstaff.

Now, with the establishment of qey’s (dream) Scholarship for Indigenous Artists, Hamill hopes to expand his efforts to help amplify the voices of Indigenous people and create a fruitful pathway for more Native artists to get a contemporary arts education at CalArts. Hamill’s generosity, matched with the Institute’s own IDEA (Inclusion, Diversity, Equity, & Access) efforts, will provide full-tuition support, beginning in fall 2022, for an Indigenous student throughout their undergraduate or graduate education at the Institute.

“When it comes to supporting students from underserved communities, access has many dimensions,” Hamill said. “It’s important to both ensure that students can grow as artists without being saddled with significant debt, and that the educational support provided addresses societal inequities that make it difficult for students from neglected communities to pursue an arts degree from a leading arts institution. This scholarship will cover tuition for a student-artist from acceptance to degree.”

“As a CalArtian, Chad has dedicated much of his work to increase the recognition and understanding of, and to build stronger connections to, Indigenous communities,” said President Ravi S. Rajan. “Now, thanks to his generous commitment to qey’s (dream) Scholarship for Indigenous Artists, he’s helping CalArts benefit from his work by supporting our aspirations to have more students from Indigenous communities join the CalArts community of artists and have their voices heard.”

Hamill also believes that CalArts is ideally positioned to support Indigenous communities through arts education. A descendant of the Spokane Tribe, his time at CalArts, which stretched from the late 1980s into the early 2000s, did not include much in terms of Indigenous content. “While CalArts has more work to do, the Institute has begun to engage and build relationships with Native communities in the Southern California region. In the process, it is becoming better equipped to support, teach, and empower Indigenous students.”

Hamill believes that CalArts is now ready to enter a more substantive phase of engagement with Indigenous communities, particularly given the Institute’s commitment to diversity, equity, inclusion, and social justice.

“By making space for Indigenous arts, worldviews, and perspectives,” Hamill said. “CalArts can be a national leader in supporting a new generation of Native/Indigenous artists.”

“There are so many tremendously gifted, largely self-taught Indigenous artists ready to share their gifts and perspectives with the world. In thinking about my growth as an artist and a human being at CalArts, I wanted to make that opportunity available to others.”