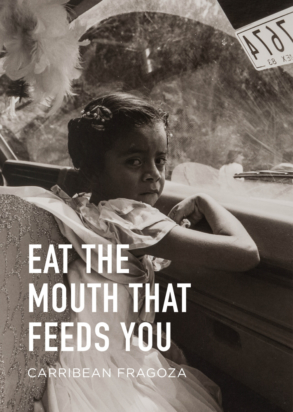 “Eat the Mouth That Feeds You” is a debut collection of stories by CalArts alum Caribbean Fragoza (Critical Studies MFA 10) from City Lights Publishers.

Earlier this year, writer, journalist, and artist Caribbean Fragoza (Critical Studies MFA 10) released her acclaimed debut collection of stories, Eat the Mouth That Feeds You. Described by The New York Times as a “rare and significant achievement from a forceful new voice in American literature,” Fragoza’s collection of stories brings the voices of Latinx, Chicanx, and immigrant women to light.

Eat the Mouth That Feeds You was inspired by the frightening, beautiful, and complicated moments experienced in daily life, specifically by women and girls. Within a fantastical, strange, and supernatural framework, Fragoza has crafted authenic, imperfect characters who struggle with their circumstances.

Published by City Lights Publishers in March, the collection includes 10 stories that were written over the course of many years, including when Fragoza was studying at CalArts. In the title story, a mother explores the pain and pleasures of being consumed by her daughter, who takes bites of her actual flesh. “Lumberjack Jack” is about a young girl remembering a time, after her father abandons the family, when she and her brother anxiously watched their mother axe their furniture, garden, and then finally the family’s beloved lime tree. The collection’s last piece, “Me Muero,” is told from the point of view of a woman who unexpectedly dies during a family party and is starting to feel her body decompose.

Fragoza grew up in the greater Los Angeles area and her literary approach has largely been shaped by the Chicano communities of East LA. Her works of fiction and poetry have been published in magazines such as BOMB magazine, Huizache, Entropy, Palabra Literary Magazine, and Emohippus. Her arts/cultures reviews and essays have been published by Aperture, Los Angeles Review of Books, L.A. Weekly, KCET, Culture Strike, and Tropics of Meta. Fragoza is also the founder and co-director of the South El Monte Art Posse (SEMAP), a multidisciplinary arts collective.