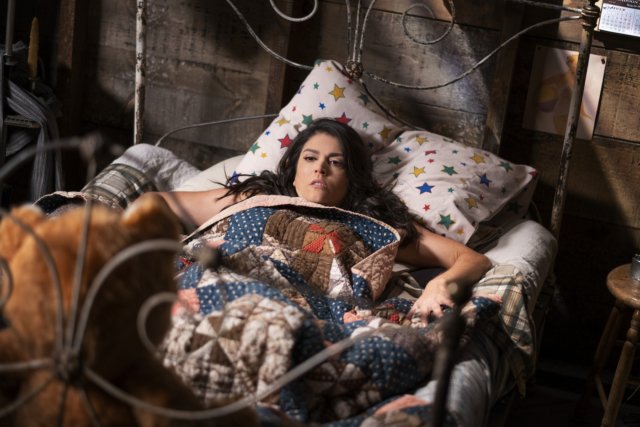 In the new series, Strong stars with Keegan Michael-Key as Melissa and Josh, a couple on a backpacking trip trying salvage their relationship. They get lost and stumble upon Schmigadoon, a hamlet that seems familiar to anyone who’s seen the 1954 MGM (and Lerner and Loewe) musical Brigadoon, starring Gene Kelly, Van Johnson, and Cyd Charisse.

All around Schmigadoon, there’s music, dancing, and singing, and Melissa and Josh think they’re in a tourist experience. But when they try to leave—they can’t. The only way to get them back over the bridge they came is to find true love.

The six-episode show is a send-up of classical musical theater films and productions from the 1950s with a “supporting” cast of veterans from both stage and screen musicals, including Ariana DeBose (the original Bullet in Hamilton), Kristin Chenoweth, Jane Krakowski, Aaron Tveit, and Fred Armisen.

Strong, who is also a Schmigadoon! producer, talked to Backstage about her involvement in the project.

“You can watch the show and see how much I love musicals,” says Strong. “We love poking fun at musicals in the way that one does when you love something.” A background in sketch comedy, she adds, lends itself well to the ensemble work of ambitiously staged musical numbers. “You’re supposed to, or you are, lifting others around you. I love reacting, and that’s a big part of it.”

Strong also has thoughts on how to tell inclusive stories in Hollywood today: whether you’re a performer, writer, producer, or any such combination, “make sure you do what you can to make the projects that you know are great.” Follow your gut, she says—and convince the powers that be that your project will make them rich. “If you show them you have a wider audience, you open yourself up to so much brilliance …

The first two episodes of Schmigadoon! are available to stream on Apple TV+ with each new episode released on Fridays through Aug. 13, 2021.