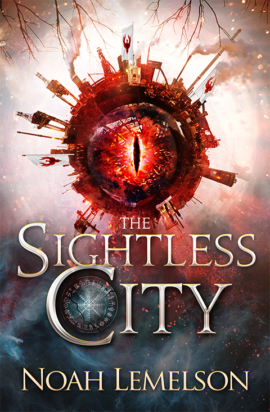 The Sightless City is the first novel in Lemelson’s upcoming steampunk/apocalyptic/fantasy noir trilogy. The genre-bending book is set in a war-torn world that is fueled by a magical substance called aether-oil. The story follows Marcel, a detective, and Sylvaine, an engineer, who comes to Marcel “…with proof that the crimes Marcel thinks he’s solving are fictions, and that the people he’s arrested have been disappearing without a trace,” according to the synopsis.

Sylvaine has a special power that enables her to wield the aethers of technology. The man behind her power is Lazarus Roache, an aether-oil tycoon with nefarious intentions.

Lemelson approaches the fantasy genre by writing in a realistic style and creating flawed characters. In an interview, he said, “It’s a fun fantasy to imagine problems that magic could solve, but I think it’s often more interesting to look at what magic can’t solve. Self-doubt, moral quandaries, societal inequalities, relationship difficulties, magic has its limit…I think many of the most interesting stories about magic characters, be they literal wizards, super-heroes, or realty-defying inventors, is to look at where their magic is no longer enough.”

The Sightless City is published by Tiny Fox Press, and will be available for purchase online through the publisher and Amazon.

Based in Los Angeles, Lemelson also writes short stories in science fiction, fantasy, and surreal-horror genres. His work has been published in online magazines such as Space Squid, Literally Stories, Silver Blade and Allegory.