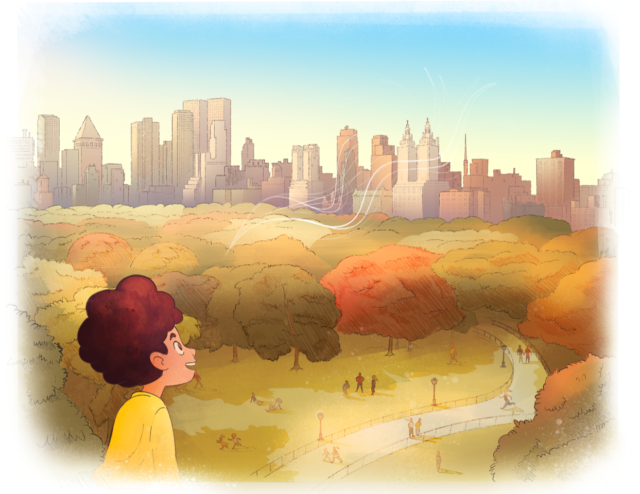 CalArts student Zoe McCuen (Film/Video BFA 23) illustrates a tale of discovery in the midst of a creative block in Kid and the Magic Orb.

McCuen collaborated with author Sago Nnune and editor/co-producer Chandler Burns to bring the story, which is independently published and 55 pages in length, to life. More about Kid and the Magic Orb from Amazon:

When the world starts running out of ideas and artists are unable to create anything new, a little kid sets out to inspire the grownups around him, and save art. But can he? After all, he’s just a kid!

The story also serves as a love letter to New York City, where Nnune is currently based.

“I was in my New York City apartment when the lockdown started in the Spring of 2020,” Nnune shared in a statement to 24700. “After a point, I found many of my peers feeling demotivated, and uninspired, and that troubled me. In addition to that, the more time I spent within my apartment, the more I missed seeing all the places of the city that I lived in and loved, and began appreciating its beauty, that is often easily taken for granted in the city’s fast-paced lifestyle. And so, Kid and the Magic Orb was a consequence of both these feelings I was quarantined with.”

In her own statement, McCuen shared her enthusiasm for the project, citing illustrated children’s books—notably Gyo Fujikawa’s 1970 collection Fairy Tales and Fables—as a longtime source of inspiration.

“As an artist, I was immediately drawn to the premise and found the theme of art block very relatable,” shared McCuen. “Throughout the process, the team gave me lots of creative control and empowered me to bring the story to life. It was so much fun to draw the characters, and illustrate my version of iconic New York City locations!”

Burns praised the importance of the story’s theme, connecting it to the childhood epiphany that adults don’t “have everything under control” at all times.

“I gave [Nnune’s] draft a read, and I’m so happy I did,” said Burns. “It struck me that this was just the sort of thing I needed as a child, and that I have a unique chance to impart some wisdom that I received too late. My hope is that today’s kids can read this book and understand that grownups are just big kids who are making it up as they go, and that’s okay!”

The book also features a cover illustration by Temirlan K.

Kid and the Magic Orb is available for purchase on Amazon.