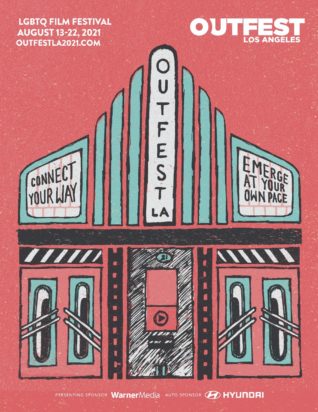 Outfest LA Film Festival, the world’s foremost organization for promoting LGBTQ cinema, returns for its 39th edition after a nearly 18-month COVID hiatus. The 10-day festival’s program is packed with outdoor events in various venues throughout Los Angeles, and indoor film screenings for vaccinated attendees. Almost all films screened at the festival will also be available for virtual streaming, allowing guests the option to experience the festival from the comfort of their own homes.

Among the more than 50 international films screening at this year’s Outfest is Death and Bowling, the directorial debut of trans filmmaker and CalArtian Lyle Kash (Film/Video MFA 19) executive produced by Rhys Ernst (Film/Video MFA 11). Lauded as a landmark in experimental and LGBTQ cinematic history, the hour-long film is a fictional meta-critique about transgender representation. More about the film from the Outfest website:

Made by and starring a multitude of trans individuals, this touching, quirky film starring Will Krisanda and Tracy Kowalski tells the story of two trans men who meet at the funeral of the captain of a Lesbian bowling league in Los Angeles. The film deftly explores death, desire, and grief as a milieu of trans experience, feeling, and poetics.

“This film was community-driven in the truest sense,” Kash was quoted in the official release. “In 2018 hundreds of artists responded to my call for transgender talent to work as cast and crew on this historic film. The majority of our cast included non-professional actors. I wrote the script, and then adapted the characters to the actors who inhabited the roles.”

Still 8 D'Lo in DEATH AND BOWLING - courtesy of T4T Productions

Fellow CalArtian Zackary Drucker (Art MFA 07) will also join this year’s Outfest as a featured guest in the fifth annual Trans and Non-Binary Summit, alongside Emmy-nominated writer and producer Our Lady J.

Among Outfest’s Los Angeles venues is REDCAT, which will host the following screenings:

Prognosis—Notes on Living director Kate Stilley Steiner (co-founder, Citizen Film) and the film’s composer Catherine Joy (founder, Joy Music House, & president, Alliance for Women Film Composers), who are participating in the Q&A, extend an invitation to the CalArts community to stop by an informal mixer at the Redwood Bar & Grill after REDCAT.