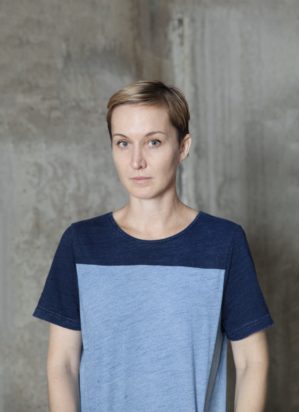 Sculptor, installation artist, and CalArts alumna Kaari Upson (Art BFA 04, MFA 07), heralded by The New York Times as “one of the most significant artists to emerge from the vibrant Los Angeles art scene this century,” passed away after a battle with cancer on Wednesday, Aug. 18 in New York City. She was 51.

A native of San Bernardino, Calif., Upson was known for her exploration of themes including family, Americana, and identity. She began her art education at the New York Studio School and went on to earn a BFA and MFA from the School of Art at CalArts, where she began The Larry Project (2005-12). The series, to which much of her career was dedicated, was inspired by an abandoned house in the artist’s childhood neighborhood that had caught fire. Then replete with homeowner Larry’s letters, legal files, and other personal effects, the property informed Upson’s artistic development. From the artifacts left behind by the mysterious neighbor, she constructed an intimate fictional profile of the homeowner through compelling video works, paintings, sculptures, and even a lifesize Larry doll. The work earned Upson early recognition, including a show at the Hammer Museum in 2007 shortly after her graduation. More recently, Upson presented The Larry Project at La Biennale di Venezia 2019.

The Larry Project represented Upson’s penchant for pursuing years-long projects focused on particular subjects, including her mother. Such is evident in her 2014 series MMDP (My Mother Drinks Pepsi), as well as her 2019 exhibition Go Back the Way You Came at the Kunsthalle Basel in Switzerland, her first European institutional solo show, in which a maternal figure is cast as the artist’s “uncanny double.” Watch a clip of the opening reception below.

Around 2013, Upson pivoted to resin sculptures, for which she is arguably best known. The works, many of which were slightly transparent and weathered, were made by casting couches, mattresses, and other domestic furnishings in silicone, urethane, or latex. Depicting the American body as indistinct from the furniture they occupy, the pieces reflect her interest in body and stain—she described these as domestic objects “in the last gasps of rigor mortis” in a 2015 profile with PIN–UP Magazine. Upson’s resin works were presented at the 2017 Whitney Biennial and the 2019 Venice Biennale.

“I worked closely with Kaari when she was a student, and counted her as a friend in the years after,” School of Art Dean Tom Lawson shared in a statement. “She was a truly remarkable person, propelled by a hunger to know and understand her world, but also full of a sociable joy. As an artist she combined a relentless habit of making things, experimenting with materials and processes to get the effects she sought, with a voracious intellectual curiosity to peel apart the meaning of life. She was always reading to expand her understanding, and keen to discuss, challenge, interrogate whatever that was, demanding suggestions of something more. And when a work was completed, ready to be shipped, or when the dreadful illness that took her from us was in remission she threw the most exuberant parties; always a happy crowd, a bonfire and booze, often oysters or a huge pan of chile. She was fearless, and generous, and knew how to bring people together to celebrate art and life.”

“I’m very saddened to hear of Kaari Upson’s passing,” School of Critical Studies faculty Janet Sarbanes shared in a Facebook tribute. “She took one of my very first classes at CalArts, What Was Postmodernism?, when I was just out of grad school and didn’t really know what I was doing yet. I was wowed by her intelligence, insight, curiosity and commitment. She and others in that remarkable group of students, which included Elad Lassry and El Blau, made me want to be a better teacher. I was so glad to see her work out in the world, and am so sorry her journey has been cut short.”

Kaari Upson was the first artist I ever visited at CalArts. It was in 2007, two years before I came to teach there. The visit was intensely memorable, and in retrospect seems prophetic, both of her subsequent development and of the type of student I could expect to encounter at CalArts. Kaari was already working on her “Larry Project,” in which she played the role of a psychic detective investigating a creepy neighbor. I quickly noted her go-for-broke approach, which propelled her considerable talents. I couldn’t decide if she would get arrested for her detective work or become an important artist. Thankfully, it was the latter. The following year, she had a solo exhibition of the “Larry Project” at the Hammer Museum, which I reviewed for Artforum. It was the beginning of a prolific and ambitious and indeed important career that has sadly been cut short. But I have no doubt Kaari and her work will be an important influence on subsequent generations of artists at CalArts and well beyond.

Read more tributes to Upson in ARTNews, The Art Newspaper, and The New York Times.