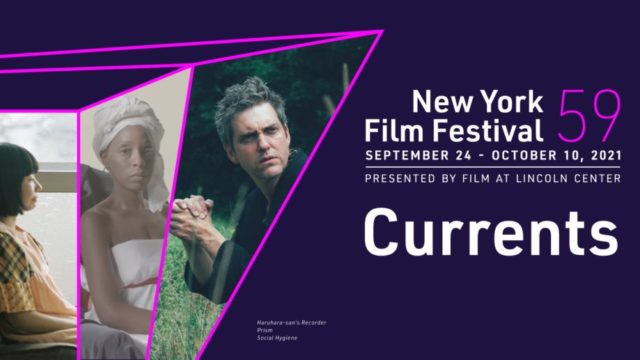 Currents at NYFF59 | Image courtesy of Film at Lincoln Center

The Currents section represents 27 nations, and includes 36 short films and 15 features. As a complement to the festival’s Main Slate, Currents selections trace “a more complete picture of contemporary cinema with an emphasis on new and innovative forms and voices.” In response to the return of in-person festivals and theaters across the nation, as well as distributor and filmmaker partners, the festival will be held in-person at the Lincoln Center in New York City. Virtual screenings will not be offered for this year’s edition, but select festival events will be presented virtually.

Representing South Korea and the US, Kim’s eight-minute short “Personality Test” (2021) makes its US premiere. About the short from Film at Lincoln Center:

A walk in the woods, an encounter with an animal, a body of water. On the soundtrack, a woman’s voice responds to an internet personality quiz, while grainy, inkjet printouts—animated and collaged by the filmmaker—approximate the imagined scenes. Distortions in the reproduction of word and picture accompany the blur of memory and fantasy, past experience and desire.

Watch a clip of the film below.

Fictions conjures representations as if imagined from the perspective of the plant world. ‘Lithic’ lifeforms made out of ceramic and organic matter were filmed in motion by a mobile of film cameras. Layered in Laborde’s superimpositions, these objects become performers alongside other images—sunlight through jungle flora, scintillating film grain—interacting in their own fictive world of pulsating matter.

Representing Taiwan and the US, Sheu’s six-minute film “Grandma’s Scissors” (2021) makes its US premiere. More about the work from Film at Lincoln Center:

Guided by the words of her grandmother, the filmmaker explores the synesthetic properties of memory. Images give way to haptic experience via a range of textures—of sea, celluloid, paper, and pencil traces, of raindrops drifting in and out of focus—linking the arts of textiles and montage into a shared artisanal tradition.

Watch a clip of the film on Sheu’s Vimeo.

Beckman, whose work was featured in a retrospective program in NYFF56, returns to this latest edition with the US premiere of her 16 mm film “Reach Capacity” (2020). More about the work from Film at Lincoln Center:

In Reach Capacity, the rapacious world of the urban real-estate market takes on the form of a playfully obsessive, yet violently deterministic system. Combining mechanical musical numbers, digital objects, and board-game parameters, Ericka Beckman converts lower Manhattan into a giant Monopoly board upon which real-estate speculators and contracted labor compete for dominance in a programmatic dance. To see the future, follow the money.

The North American premiere of “Night Colonies” (2021) by the esteemed filmmaker is a 14-minute “rumination on the unobserved passage of time.” Weerasethakul’s recent internationally filmed feature drama Memoria (2021) will also be screening as part of NYFF59’s Main Slate program.

See the full NYFF59 Currents program at the Film at Lincoln Center website. Proof of vaccination will be required for all in-person festival attendees at indoor and outdoor venues.