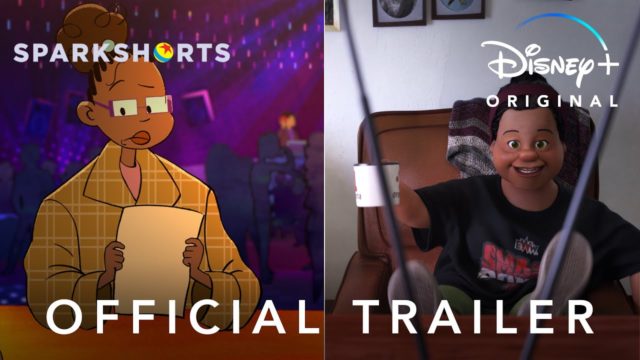 Pixar’s SparkShort series continues with storyboard artist Aphton Corbin‘s (Film/Video BFA 16) “Twenty Something,” the ninth short selected since the program’s launch in 2019. Corbin recently spoke with Ramin Zahed of Animation Magazine about the process and inspiration behind the short.

“Twenty Something” follows Gia, a young woman feeling insecure about her transition to adulthood, whose sister takes her to a nightclub to celebrate her 21st birthday. Hilarity ensues as flashbacks featuring Gia at ages one, 10, and 16 work together in their attempts to portray her current self as a genuine grownup.

Corbin shared her inspiration for the short in the interview:

My idea stemmed from a period in my own life when I had just finished college, trying to find my first apartment after college, learning about oil changes and all those adult things coming together. And I just felt like I was just a kid trying to wrangle myself together so I could feel like an adult. It’s such a truthful moment for me, to come up with a creative way to express what I was going through my head. When I was offered the Spark position, I was very insecure about that as well. So, this insecurity felt like a theme that I could explore a little more. I felt like an adult one minute [and] like kids stacked in a trench coat the next. Something about this idea clicked … So, the first part of my journey was taking that idea and turning it into a fleshed-out story.

Corbin interned at Pixar after graduating from CalArts in 2016, and was hired soon after. She worked on Toy Story 4 (2019) and Soul (2020), the latter directed by Oscar-winning CalArts alum Pete Docter (Film/Video BFA 90). According to Corbin, Doctor actively sought input from herself and others working on Soul, which encouraged her to form a collaborative team for her SparkShort. In this vein, she credited fellow CalArtian animator Lucas Pacheco (Film/Video BFA 16) for the “Twenty Something’s” unique 2D style.

“Lucas was instrumental in creating model sheets for all of the characters, complete with expression sheets and style guides,” Corbin noted. “I got into animation because I loved drawings, and seeing those drawings come to life [is a] super special moment.”

“Twenty Something” is now streaming on Disney +. Watch the trailer above, and read the full interview at Animation Magazine.