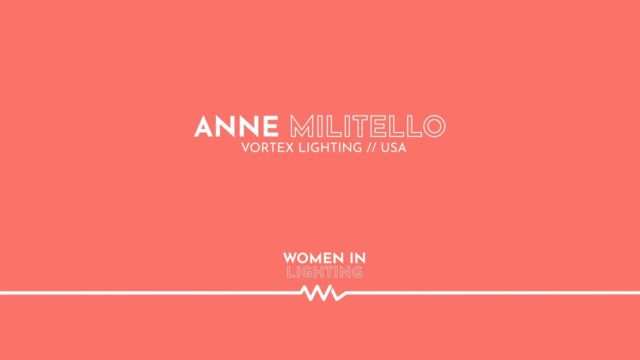 Veteran lighting designer and School of Theater faculty Anne Militello has been named the US ambassador for Light Collective’s Women in Lighting (WIL) project. WIL, which was launched on International Women’s Day 2019 by UK-based Light Collective, is a digital platform for “inspir[ing], support[ing], and encourag[ing] the next generation” of women lighting designers.

Militello, founder of Vortex Lighting and a former Walt Disney Imagineer, boasts an extensive lighting design career for art, architecture, and performance. As a WIL ambassador, she will be a point of contact for those who seek to learn more about the organization and cultivate a supportive community. Militello was selected for an ambassadorship alongside fellow lighting designers Mildred M. Moyo (Zimbabwe) and Megumi Yatabe (Japan).

“Our intention is to build bridges between different lighting industries as well as redress the balance of the heavy bias towards male lighting designers,” said Sharon Stammers, co-founder with Martin Lupton of Light Collective and Women in Lighting in the release. “However, Women in Lighting is not only about gender equity. It’s also about inclusivity and how this is beneficial to an industry as a whole.”

“You want to be able to go through genres,” Militello said during a virtual interview with Stammers when asked about advice for aspiring women lighting designers. “As a lighting designer, you’re a conduit for a means of communication using this amazing knowledge of light. Flow like a river through these spaces so that you can experience all of this.

“A lot of the work that I do now is being an educator at California Institute of the Arts,” Militello continued. “It’s really about keeping your eyes open and learning. I think that in terms of being a female person or identifying as a female person working in the field, we don’t have to worry so much. Like it is in any profession where you’re trying to gain equality, you just want to be true to yourself, the person that you are.”

Watch the full interview between Militello and Stammers.

Militello is an internationally acclaimed lighting designer and current head of the Lighting Program in the CalArts School of Theater. She began her career in theater and on concert stages, and expanded her practice to architectural and theme park lighting design, as well as lighting for fine art. She is the recipient of the prestigious OBIE Award for Sustained Excellence in Lighting for Off-Broadway and Off-Off Broadway Theater. As an Imagineer, Militello received both the Theme Park Designer of the Year from Lighting Dimensions International Entertainment Design Award and a TEA Award for her work on “The Adventures of Spider-Man” ride at Universal Studios Orlando. In 1996, she founded Vortex Lighting, of which she is also principal designer.