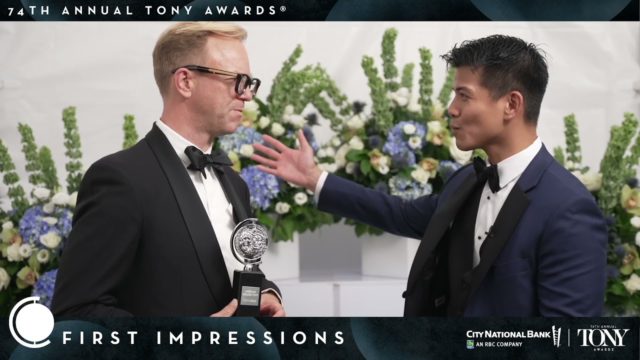 On Sunday (Sept. 26), theater luminaries recognized achievements in Broadway at the 74th Tony Awards at the Winter Garden Theatre in New York City, after more than a year delay due to the COVID-19 pandemic. CalArtian Justin Townsend (Theater MFA 03) joined a roster of distinguished winners upon receiving the award for Best Lighting Design of a Musical for Moulin Rouge! The Musical.

Moulin Rouge! The Musical led this year’s pack with 10 total awards, including Best Musical. Townsend, a four-time Tony Award nominee and first time winner, had previously been recognized for his work on the musical at the 2020 Drama Desk Awards (Outstanding Lighting Design For A Musical). He was also nominated in the same category this year for his lighting design work on Jagged Little Pill.

Based on Baz Luhrmann’s 2001 film, Moulin Rouge! The Musical brings a “theatrical celebration of truth, beauty, freedom and — above all — love” to the stage with a mashup of the film’s memorable tunes. The play opened to audiences on July 25, 2019, at the Al Hirschfeld Theatre in New York.

“The show is so important to me, and the creatives that made it,” Townsend told musical theater actor Telly Leung (Glee, Godspell) at the Tony Awards First Impressions Cam. “It just makes it special to be here, special to be on Broadway, special to be back.”

Watch the full interview above, and see the full list of the evening’s winners on the Tony Award website.

The Institute’s presence was also felt at the red carpet, with legendary Broadway star Bernadette Peters arriving in a black gown by Chouinardian fashion designer Bob Mackie. In 2019, Mackie won the Tony Award for Best Costume Design of a Musical for The Cher Show.