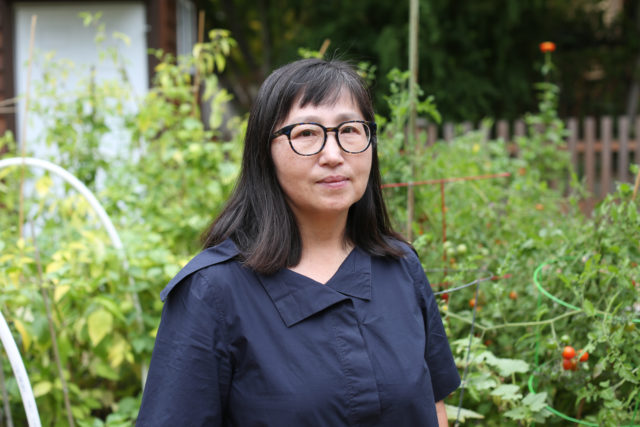 Poet and translator Don Mee Choi (Art BFA 84, MFA 86) has been named a 2021 MacArthur Fellow, joining the distinguished ranks of hundreds of artists and academics across disciplines since the grants were first issued in 1981.

Cecilia Conrad, managing director of the MacArthur Fellows, shared the following about the 2021 grantees:

As we emerge from the shadows of the past two years, this class of 25 Fellows helps us reimagine what’s possible. They demonstrate that creativity has no boundaries. It happens in all fields of endeavor, among the relatively young and more seasoned, in Iowa and Puerto Rico.

Once again, we have the opportunity for exultation as we recognize the potential to create objects of beauty and awe, advance our understanding of society, and foment change to improve the human condition.

Choi’s boundary-pushing poetry intersperses text with various visuals, including maps, photographs, drawings, archival materials, handwritten documents, and “typographical experiments.” Many of the materials come from the artist’s father, a photojournalist who covered uprisings and warzones in Korea and Vietnam.

“In my work, I try to focus on depicting war historical trauma, collective and personal memory, exile, dislocation, and the politics of distance,” Choi shared in a video with the MacArthur Foundation. “I am writing about historical events that took place in South Korea to understand my life, and even my father’s life, in the context of the power relations between Korea and the US.”

Among Choi’s works are Hardly War (2016), a hybridized memoir and opera libretto about “capturing such horrors as the incendiary power of napalm,” and DMZ Colony (2020), which chronicles the artist’s return to Korea as it intermixes with the voice of survivors living near the demilitarized zone.

“The question I often … ask myself is, does my art perpetuate historical oblivion?” shared Choi. “I hope that my work generates literary resistance against geopolitical borders, including the borders of linguistic and literary conventions.”

The MacArthur Foundation established the grants to offer grantees “the flexibility to pursue their own artistic, intellectual, and professional activities in the absence of specific obligations or reporting requirements.”

Choi, as well as other fellows, will receive an unrestricted amount of $625,000 over the course of five years.

Watch a clip of Choi above, and learn more about this year’s MacArthur Fellows on the MacArthur Foundation website.