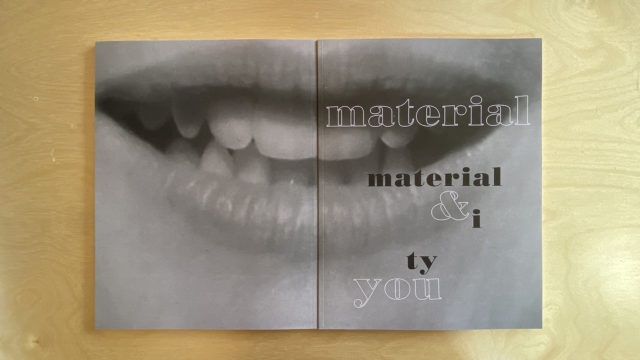 Material-i-ty book, front and back cover. Published by Gosia Wojas, July 2021. | Image courtesy of the artist

Wojas shared the origin of the publication in a recent email interview with 24700:

I began being interested in the concept of materiality after coming across a group exhibition, under the same name in Gdansk, Poland, in 2012 curated by Aneta Szylak at the now closed Wyspa gallery. I was intrigued by the overall rigorous curatorial research as well as a high regard to the theoretical elements in the show. Polish is my native language and I am always drawn to linguistic structures, morphology or transliteration, but also deconstruction. I realized that the word materiality, when broken down into separate parts becomes, material-i-ty, which in Polish is a literal translation of material-and-you. This personal revelation became the foundation for the concept of the book, and the connection between a material and a human subject became somehow really important to me to investigate further.

Wojas went on to request original texts from friends and artists she knew through her curatorial project, Projekt Papier, through which she organized exhibitions, screenings, and programming between 2012 and 2016. Contributing writers Benedetto, Karapetian, and Leslie submitted their texts in 2013, and initially posted online on the Projekt Papier website.

Projekt Papier was later split into the Material-i-ty book series and The Absent Museum lecture series. Among the lectures in the latter series was Making an Activist, which was organized during Wojas’ studies at CalArts and featured ProjectQ founder Madin Lopez.

Wojas received funds from UCI’s Department of Art (in which she is a current MFA candidate) for printing the publication, and from CalArts’ School of Art for the design.

“The funding for the design of the book came from CalArts School of Art after I got the courage to talk to Tom Lawson about it,” Wojas shared. “It was my last semester at CalArts, I was about to graduate with my BFA, and Tom [had] been doing studio visits with me. He was the dean of the art school at the time, but also a long time writer and editor. I sent him a draft of the book and he agreed to look for funds from the department”.

The book was designed by fellow CalArtian Silvi Naçi (Art MFA 19), with whom Wojas has been recently collaborating on her Absent Museum workshops. Material-i-ty is currently available at independent bookstore Skylight Books in the Los Feliz neighborhood of Los Angeles.

The artist also discussed work she and her Absent Museum collaborators produced during the pandemic:

During the pandemic when we were all confined to our private, domestic spaces and during the looming US election, the Absent Museum was hosted online by the curators of the UCLA New Wight Biennial (2020) and by the organizers of GLAMFA at Cal State Long Beach (2021). I collaborated with [Naçi] and PhD student in Comparative Literature at UCI, Ana Baginski and organized manifesto writing and discussion sessions, titled Hope as Manifesto and Care as Manifesto (respectively).

Wojas, a Polish-born, Los Angeles-based artist, curator, cultural worker, and organizer, has practice a rooted in “topics of materiality and activism, and the potential for resistance.” From 2006 to 2009, she served as a director at Susanne Vielmetter Los Angeles Projects. Throughout her career, she has organized talks, film screenings, exhibitions, and performances at numerous venues, including MAK Center for Art and Architecture, Los Angeles; Łaznia Center for Contemporary Art, Gdansk, Poland; Women’s Center for Creative Work, Los Angeles; Souterrain Gallery at the Hoffmann Collection in Berlin; and Torrance Art Museum, Torrance, Calif.