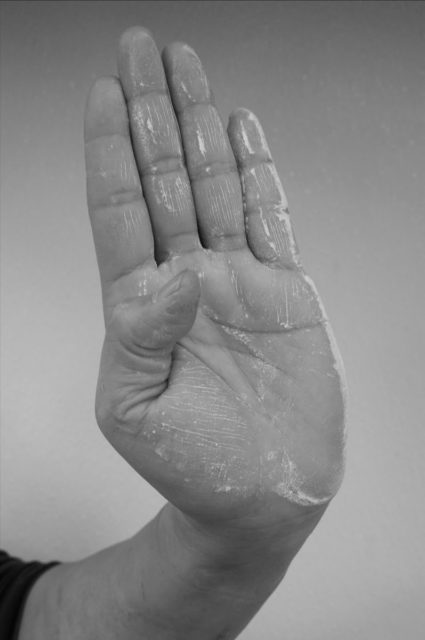 Bread Story is a continuation of the artist’s investigation of “production and labor by exercising the tension between text and image as well as printed and video media.” The exhibition includes an artist book, photograph series, and an experimental film. The latter, which was inspired by German playwright Bertolt Brecht’s script The Bread-King Learns to Bake Bread, features LA-based bread-worker Roxana Jullapat as Prancha “trac[es] an American landscape marked by the displacement and industrialization of the past century.”

Brecht had moved to California in December 1941 after being exiled from Germany for his Marxist views. The Bread-King Learns to Bake Bread was never produced as a result of the Hollywood blacklist era of the 1940s and 50s; the play was especially deemed a critique of American consumerism.

Jullapat was born in the US but raised in Costa Rica, which defined her sense of production. She returned to the States to learn to bake in Los Angeles bakeries, and in 2017 opened her own bakery named Friends and Family. Jullapat recently published a cookbook titled Mother Grains: Recipes for the Grain Revolution, which was named a Best Cookbook of the Spring by Eater, Epicurious, and the Robb Report.

The series of photographs in Bread Story portrays images of Jullapat’s hands as a form of portraiture. The artist book, published earlier in 2021, is the culmination of her 2019 project with the Los Angeles Contemporary Archive (LACA). More about the exhibition from table:

These images of hands line the walls of the space and are intimately repeated through the artist book, in this case taking form as a transparent box housing the photographs as hand-held objects, and a printed booklet of the video’s narration. The video piece brings together archival material, analog and digital photographs, and moving image. These elements are situated within a contemporary narration of Brecht’s text, which has been recorded and filmed inside a sound booth, calling attention to the system of its own production.

table is located in the Avondale neighborhood of Chicago and open by appointment. Please reach out at contact@tableprojects.com to schedule a visit, or subscribe to the mailing list on the official table site.