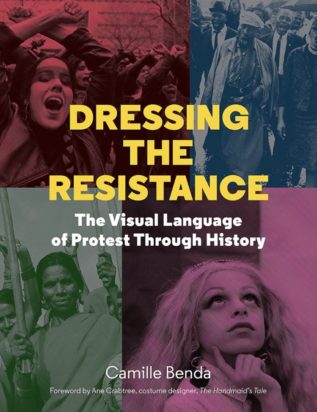 ‘Dressing the Resistance: The Visual Language of Protest Through History’ by Camille Benda was published on Oct. 19, 2021 by Princeton Architectural Press.

In her new book, Dressing the Resistance: The Visual Language of Protest Through History, Camille Benda, head of costume design in CalArts School of Theater, looks at the powerful ways clothing influences and adds definition to resistance movements and revolutions across the globe.

From the American suffragettes who made and wore dresses from old newspapers printed with voting slogans to the #MeToo movement, to 20th-century punk subcultures to Black Lives Matter marches, Benda brings to life the history of dress and activism through more than 150 archival images, photographs, and paintings.

“Camille’s work is a wonderful testament to her creative practice and leadership in our design community,” writes CalArts School of Theater Dean Travis Preston in a message about Benda’s new book.

Based in Los Angeles, Benda has more than 20 years of experience designing costumes for film, theater, and commercials across the US and Europe. Her feature film credits include Dark was the Night (2018), The Bachelors (2017), Blood Stripe (2016), and The Golden Compass (2007), to name a few. Benda has also given talks on dress history and the philosophy of design at the Victoria & Albert Museum, The Costume Society at the Courtauld Institute, Stanford University, and University of California, Berkeley.

Dressing the Resistance: The Visual Language of Protest Through History is published by Princeton Architectural Press and includes a Foreward by Ane Crabtree, costume designer of The Handmaid’s Tale.

Dressing the Resistance: The Visual Language of Protest Through History