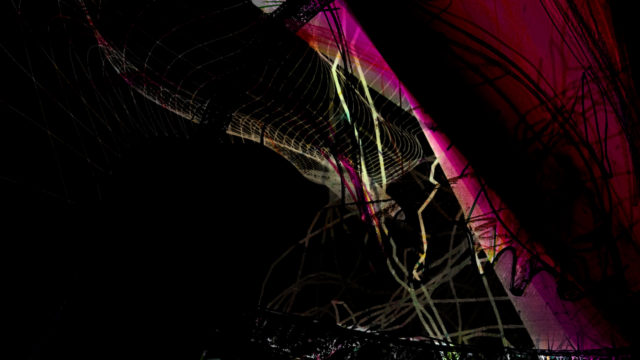 Just before the fall semester began at CalArts, woodwind virtuoso and CalArts music faculty Vinny Golia finished the first of three movements of a large music piece, Even to this day…Movement One: Inoculations Music for Orchestra and Soloists.

“Large” is a bit of an understatement. Even to this day’s first movement clocks in at 10.5 hours with 158 sections.

Golia worked on the project during the 2020 COVID shutdown since concerts were cancelled, tours were placed on hold, and classes were only held online. He worked with a number of CalArts alums and faculty—both virtually and in small group sessions—to complete the prodigious endeavor.

“I started writing Even to this day … for my upcoming 75th birthday a year before it was to happen at the request of [saxophonist] Rent Romus, who was organizing a concert of 75 musicians to perform the piece, unaware that COVID lurked around the corner,” Golia writes in the digital album’s liner notes.

“The performance never happened. So, I decided to go for what I wanted using real and virtual musicians performing composed music combined with improvisation—which always seems to be the best way to get what I want musically—a blend of serenity, intensity, and stability that shifts like the sands in a desert. And, as I wanted to have many of the West Coast musicians I play with represented in the music, I came up with a plan to have soloists play over a large and continually changing symphonic setting.”

“Movement One: Inoculations,” for orchestra and 21 improvisers, was crafted with the theme of vaccination—against the coronavirus and how people have mentally steeled themselves against “paranoia, boredom, depression, isolation, apathy, and all of the other symptoms of this disease that we did not anticipate.”

“All the soloists were recorded at separate times, many recorded themselves, except for one or two pieces Wayne Peet played on with his son Ellington, a fine young drummer,” Golia explains in a later email correspondence. “I think William Roper and Dan Clucas, a former CalArtian, recorded at Wayne’s studio in separate sessions, and I did one session there recording baritone saxophone solos. The rest of my work I recorded in my home, with again one remote session where Wayne came out and recorded me on various woodwinds, percussion, and gongs. I was constantly recording until about a week before the project was released on Aug. 25.”

In a recent (4.5 out of 5-star) review, Ron Coulter writes in The Free Jazz Collective:

Inoculations for Orchestra and Soloists” is a huge undertaking that displays the full scope of Golia’s musical artistry. It showcases his range of interests in jazz, art music, composition, improvisation, and collaboration across the 158 tracks of seemingly endless creative output. One of the most impressive aspects of this release is that each track leaves the listener eager to hear where the next track will take them, even after the first 157! This is in part due to the widely diverse instrumentations and improvisational approaches from the 21 improvisers, and also in large part due to Golia’s broad musical aesthetic and skill set applied to this creation.

In addition to a number of CalArts musicians and other West Coast jazz greats participating in Golia’s massive undertaking, he teamed up with multimedia artist Carole Kim (Film/Video-IM MFA 03) to create the album cover art and five videos for select tracks in the first movement. They two artists have known each other for decades, first working together at Arcana, a fine art bookstore in Culver City in the ’90s.

“We performed together on and off a few times in various ensembles, and I also was featured on winds and gongs on some of her residency pieces,” Golia notes. “Recently, just before my project, she asked me to be a part of an ensemble, a collaborative drawing project as she knew of my visual art background. Some sections of that piece are in her videos for my piece.”