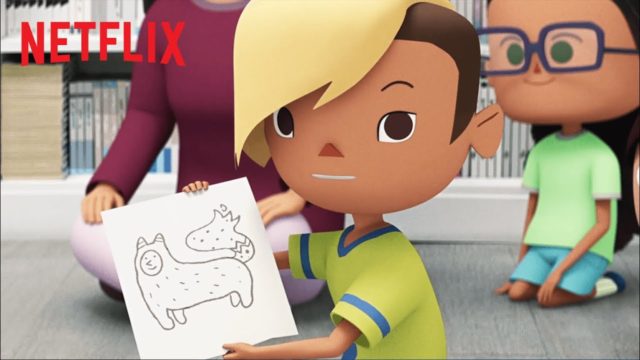 Episodes from the lauded animated series City of Ghosts screen outdoors in downtown Los Angeles on Thursday (Oct. 28) at 6 pm. The family-friendly event is hosted by the arts and culture organization Clockshop, LAist, CalArts School of Film and Video, and California State Parks.

Created by award-winning animator and CalArts alum Elizabeth Ito (Film/Video BFA 04), City of Ghosts has been hailed for showcasing the history as well as the forgotten people and cultures of the Los Angeles area.

In the Los Angeles Review of Books, Phillip Maciak writes that the Netflix children’s show might be “the best television series of 2021. For anybody.”

The premise of Ito’s six-part series is that Los Angeles, the city, is haunted. This is both metaphorical and literal. Los Angeles, like any city, is layered with histories invisible to the newcomer or even the naked eye of the native. A store that is now one thing used to be another; a house where a family now lives used to be occupied by somebody else and somebody else before them; a neighborhood defined by the cultural presence of one immigrant group used to be defined by the cultural presence of another; gentrified areas once were not; contemporary buildings stand on the graves of old ones, lost to time for ordinary or nefarious reasons. Ito’s series endeavors to tell some of these stories, and the characters who do the telling are, quite simply, ghosts.

A Q&A follows with Ito and artist and CalArts visiting faculty Mercedes Dorame, who lent her voice to “Tovaangar” episode. The screening is part of Dorame’s Pulling The Sun Back art installation with Clockshop.

All Clockshop events are open to the public, and no one will be turned away for inability to pay. RSVP (with optional donation) on Eventbrite.

Watch City of Ghosts on Netflix.