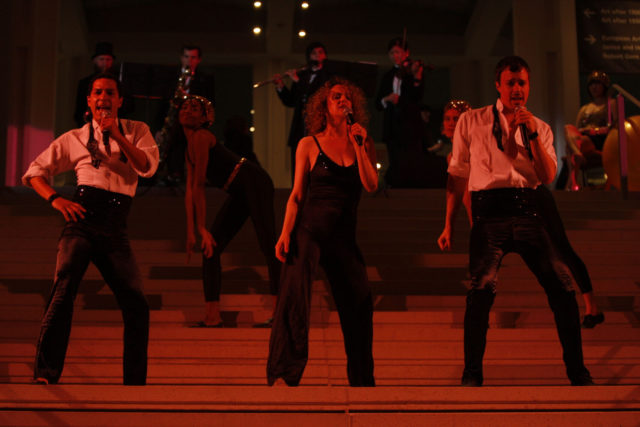 Established in 2000, My Barbarian’s works seek to “theatricalize social issues, adapting narratives from modern plays, historical texts, and mass media into structures for their performances.” The Whitney’s My Barbarian exhibition traces the history of the group’s body of work, drawing from their archive while collaborating with other artists. In addition to filmed performances and video documentation, the expansive exhibition also includes music, paintings, drawings, sculptures, masks, costumes, tiles, and even puppets. The exhibition is curated by Adrienne Edwards, Engell Speyer Family Curator and Director of Curatorial Affairs; and Mia Matthias, curatorial assistant.

My Barbarian will also be accompanied by the first monographic collection ever written on the collective. Published by Yale University Press, the monograph was created in close collaboration between Gaines, Gordon, Segade, and Edwards. According to the official press release, the collection “explore[s] the collective’s output through a lens of queer and other critical theory and contextualize[s] it within the twenty-first-century experimental performance scene in Los Angeles and New York City.” In addition to essays, drawings, and scripts, the publication also includes never-before-seen materials from each of the artists’ personal archives. The collection is scheduled for release Jan. 25, 2022.

The trio were also commissioned by the Whitney to create Rose Bird, a performance piece named after the first woman to serve as chief justice of the California Supreme Court. The work offers reimaginings of Bird’s biography as a teleplay, while integrating media reports framing her career and personal life.

The My Barbarian live performances reconceive iconic shows from the group’s history, offering a response to contemporary contexts and exemplifying the array of theatrical styles and formal strategies the collective has explored.

More about the performance series from the museum’s official site:

The live performances include:

Gaines is a New York-based writer, educator, and interdisciplinary performer currently serving as assistant professor of Performance Studies at New York University (NYU). Gaines, alongside Ash Fure and Yuval Sharon, was recently announced as a member of The Industry’s Artistic Director Cooperative.