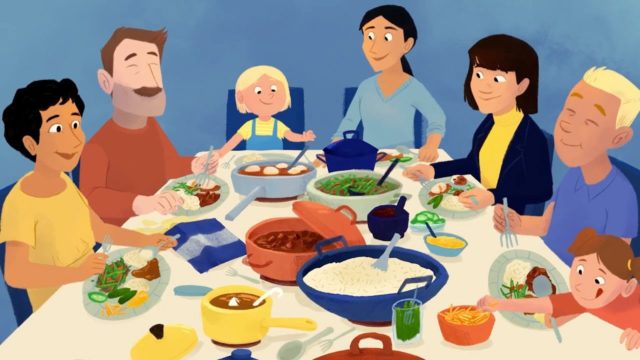 Los Angeles-based animator and CalArtian Mollie Ong (Film/Video BFA 20) is among the Toon Boom Animation ambassadors whose works are featured in “The Ingredients of Animation,” the software company’s newly launched demo pack for the release of its latest software Harmony 21.

Ong, who was named a Toon Boom ambassador earlier this year, developed her scenes over the course of six weeks. Her contribution depicts the creation of liang pi, an ancient Chinese noodle dish served cold. Through the Harmony 21 software, Ong was able to create a style emulating her signature watercolor textures and hand-drawn sketches.

Ong further described described the inspiration behind her contribution in a recent interview with Cartoon Brew:

Since the pandemic began, I took the chance to learn more about cooking traditional Chinese food. Growing up, my parents gave us more of an American household so we would fit in more. I’ve been researching Chinese cooking and the history behind it, so I thought this was the best chance to play with those ideas …. For this piece, I tried to incorporate imagery from older times and then bring it into the modern era. We start with the ladies kneading the dough in a more rustic location and then we end with it being sold in the street from a food stall in China, which is kind of how you see it today.

Read Ong’s full interview on Cartoon Brew, and watch “The Ingredients of Animation” above.