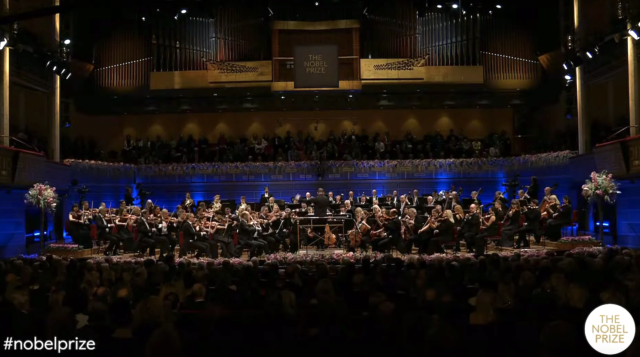 CalArts alum Ryan Bancroft (Music BFA 11, MFA 13) made his debut as incoming chief conductor of the Royal Stockholm Philharmonic Orchestra on Wednesday, Dec. 8. Bancroft led the orchestra for the 2021 Nobel Prize Concert in front of a live, in-person audience at the Konserthuset Stockholm that included King Carl XVI Gustaf of Sweden and Nobel Prize laureates in the audience.

The concert was also livestreamed on YouTube before a worldwide audience.

During the introduction, Laura Sprechmann, CEO for Nobel Prize Outreach, and Stefan Forsberg, executive director of the Stockholm Concerthall, welcomed attendees and provided an overview of the evening’s program. In his introduction, Forsberg described their new maestro as “the skyrocketing conductor Ryan Bancroft.”

The concert began with Excelsior!, an orchestral piece written in 1896 by Swedish composer Wilhelm Stenhammar, then aged 25. It was followed by Cello Concerto No. 1 by Saint-Saëns with soloist Sol Gabetta.

The Nobel Prize Concert capped an outstanding week for Bancroft, as he was officially appointed chief conductor of the Royal Philharmonic Orchestra on Dec. 6. He will take up his post with the 2023/24 season.