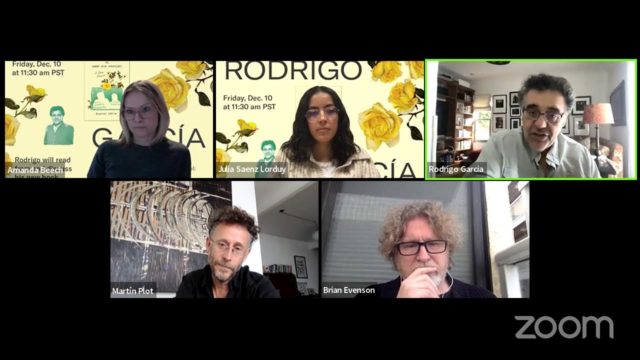 Director, writer, and CalArts trustee Rodrigo García, whose films include Albert Nobbs and Things You Can Tell Just by Looking at Her, has penned his first book, A Farewell to Gabo and Mercedes: A Son’s Memoir of Gabriel García Márquez and Mercedes Barcha as a tribute to his parents.

Márquez was the Nobel Prize-winning Colombian author of novels One Hundred Years of Solitude and Love in the Time of Cholera. When he passed away in 2014, Rodrigo had been taking what he calls “field notes” of his conversations with his father during his last days.

In a Dec. 10 YouTube panel (watch above) moderated by Dean of Critical Studies Amanda Beech, García read an excerpt from the book and discussed its themes with fellow authors Martín Plot, Brian Evenson, and Julia Sáenz Lorduy.

García recalled his father’s decline and the onset of dementia, which led him to realize he could no longer write novels. “Memory is my tool and my raw material,” Márquez would tell his son as his memory was fading, and lamented that he would not be able to write about his own death.

But the famed magic realist author had written several striking death scenes in his books, including that of the Colonel in 100 Years, which García excerpts in the memoir.

“It’s very hard to separate my dad from his creations,” said García, who added that he didn’t want the book to feel like it was just “about the death of a famous writer.” By writing about his mother’s death as well, the book becomes a meditation on aging and death and a son’s bond with parents.

“I am not a religious person, but the more people that have died, the more I feel that the dead are not dead,” García said. “It’s hard to explain … I’m not saying they appear or that I communicate with them, but that their presences are incredibly powerful. I think especially as you get older, and time is limited, your ties to the people who have left are very (strong) … there is a kind of continuity.”

He wrote the book in what he calls the “past-present,” detailing his father’s health struggles while reminiscing about moments from their past.

“It was a compulsion. I just knew I wasn’t going to be able to come back to it,” he said of writing the book quickly.

As his father said, “life is not what happened, but how you remember it,” and García has commemorated both parents in this memoir, which Kirkus Reviews called “a warm homage filled with both fond and painful memories.”