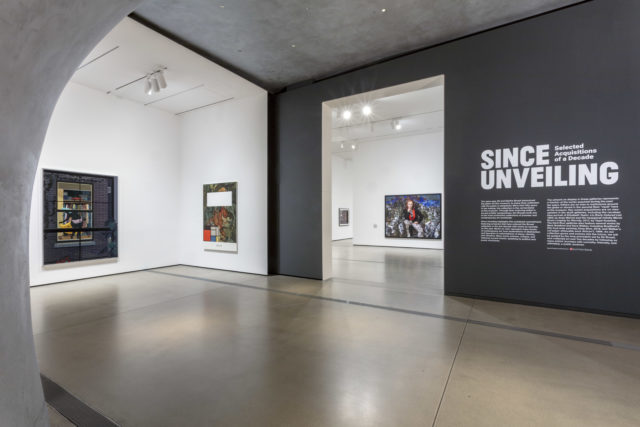 The Broad contemporary art museum in downtown Los Angeles is showcasing nearly 60 pieces from its collection in the exhibit Since Unveiling, which runs through April 2022.

Among the artists featured is John Baldessari, the late American conceptual artist known for his work with found photography and appropriated images, who taught at CalArts from 1970 to 1986. The exhibit also includes new acquisitions from CalArts alums: Cathy Opie, Mark Bradford, and Lari Pittman. Agnieszka, “Manifesto of the Milky Night,” Little Review no. 131 (4568), May 10, 1935, National Library of Poland, Warsaw, February 2, 2017, by photographer and co-director Photography and Media, School of Art Sharon Lockhart, is also featured in the exhibition.

Nearly half of the artworks exhibited are on view for the first time at the museum, which opened in 2015.

The exhibition features both monographic and thematic galleries, including a presentation of works by Cindy Sherman spanning the artist’s career, the nine-channel HD video projection of Ragnar Kjartansson’s The Visitors, as well as explorations of political power and commerce by Bradford and Andreas Gursky.

Bradford’s Corner of Desire and Piety (2008) is the Los Angeles native’s reflection on the aftermath of Hurricane Katrina.

Opie’s seven-photo series monument/monumental was taken during a road trip from Los Angeles to Richmond, Virginia in 2020, when Black Lives Matter demonstrators reclaimed a statue of Confederate general Robert E. Lee as a protest site for racial justice.

On the journey, Opie took blurred photographs of the American landscape. “In the first and last image, you’re looking at the exact same sunset. In this piece, there is this suspended sun that never quite sets on the history of racism in this country. It is very much about what I was thinking about as I was traveling,” she wrote.

The free exhibition is in the first-floor galleries. Advance online ticket reservations can be made at ticketing.thebroad.org.

Since Unveiling: Selected Acquisitions of a Decade