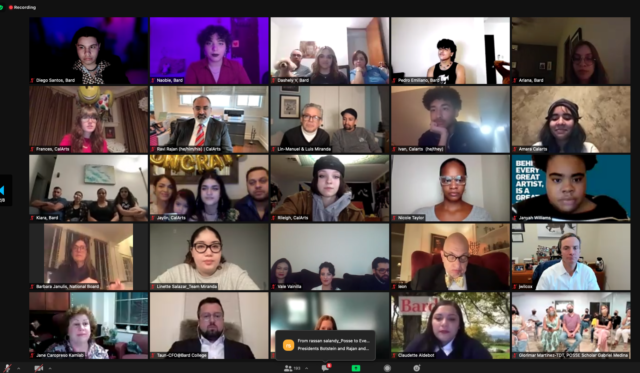 During a touching, virtual ceremony on Jan. 24, the New York-based Posse Foundation announced that 11 students from New York City will make up the inaugural CalArts cohort in the Posse Arts Program.

Each of the Arts Posse Scholars—together known as the Arts Posse—will receive a full-tuition scholarship beginning when the group enrolls for the Institute’s Fall 2022 semester. CalArts is the first partner institution to have joined the new program, a collaboration with the foundation to enable a pipeline of diverse leaders in the creative arts.

“We’re believers in the Posse process,” said Lin-Manuel Miranda, the actor, playwright, and Posse Foundation supporter, who attended the livestream with his father Luis A. Miranda Jr. The event honored the CalArts cohort and 16 other Arts Posse scholars bound for Bard College in New York and the University of North Carolina School of the Arts.

Together the recipients will receive $5.2 million in scholarships from the schools. Miranda cast college as a time for self discovery, “to find what you’re passionate about.”

They can lean on one another for support and as potential collaborators, Miranda added, urging the students to get to know one another.

Miranda and his father, the founding president of the Hispanic Federation, said the Posse Arts Program echoes less-formal support systems that buoyed their own college years. The duo and the Miranda Family Fund joined in the creation of the Arts Posse program, which connects young artists from public high schools across the country to top arts-oriented colleges and universities.

The initiative was first announced publicly in April 2021 with the help of former First Lady Michelle Obama.

CalArts is a natural fit, as the Institute focuses on cultivating arts leaders from underrepresented communities, CalArts President Ravi Rajan said at the Monday ceremony. He jumped at the chance for the Institute to be the program’s first institutional sponsor, he said.

“When artists come from underrepresented communities, they can create pathways through their work to allow new voices to blossom,” Rajan said. The work fulfills the promise of the U.S.’ founding—the idea that all people are created equal, he added.

Members of the first Arts Posse cohort at CalArts

Formed in 1989, the Posse Foundation has 64 partner colleges and universities as the nonprofit identifies, recruits, and trains future leaders in a variety of fields. Partner institutions have awarded about $1.6 billion in scholarships to more than 10,000 Posse Scholars, who graduate at a rate of 90%.

More than half of the scholars—57%—are first-generation college students. The foundation equips scholarship recipients with extensive support—including a network of other Posse Scholars—to help them make the most of their potential.

Nearly 7,000 Posse alumni are now in the workforce, foundation President and Founder Deborah Bial said in the Monday ceremony. The Arts Posse Scholars “will have this wrap-around program with you through the rest of high school, into college and into the workforce,” she said.

Another speaker, U.S. Education Secretary Miguel Cardona, said Posse Scholars lead in their homes, on their campuses, and in their communities.

“You’re going to pursue your art, and you’re going to lead,” Cardona said. “We so desperately need leaders, and we forget: We need leaders in the arts who come from diverse backgrounds. That’s you. We believe so, so much in you.”