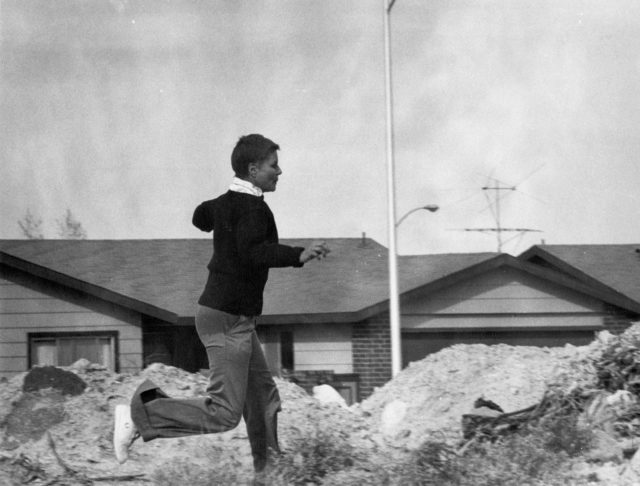 Curator and interim associate dean of the School of Art Michael Ned Holte organizes how we are in time and space: Nancy Buchanan, Marcia Hafif, Barbara T. Smith, a major group exhibition running from Jan. 28–Jun. 12 at the Armory Center For the Arts in Pasadena, California.

how we are in time and space is a historical survey of the practices and bonds between former School of Film/Video faculty emeritus Nancy Buchanan, Marcia Hafif, and Barbara T. Smith (Chouinard 65). Comprising more than 50 works and spanning more than 3,000 square feet, the exhibition seeks to “significantly elevate dialogue around these groundbreaking artists in tandem with the Armory’s robust education and community outreach programs.” More about the exhibition from the Armory:

This exhibition is shaped by the forces of proximity, friendship, generosity, and longevity. Buchanan, Hafif, and Smith met in the newly formed MFA program at UC Irvine and remained friends for life. Structured around the subjects of bodies, communication, and dwelling, this exhibition reveals a remarkable range of pursuits explored by the three artists for the past 50 years. Though each followed their own trajectory, this exhibition highlights the differences as well as the “empathic overlaps” of these life-long friends.

Buchanan is an installation, performance, and video artist known for elaborate drawings of hair and exploration of body transformation. She is a four-time recipient of NEA’s Individual Artist grants, as well as a COLA grant and a Rockefeller Fellowship in New Media. In 2013, her videotapes were the subject of a solo screening at REDCAT. Her works have also been included in various group exhibitions, including Agitprop at the Brooklyn Museum; RE-ACTION, a traveling exhibition originating in Spain; and Jonny at Insitu, Berlin. Buchanan taught in the School of Film/Video from 1988 to 2012.

Hafif, whose drawings investigating the human body also appear in the exhibition, was an experimental painter best known for her monochromatic paintings. Her works have been the subject of numerous international solo shows, and has been exhibited at MoMA PS 1; Haus für Konstruktive und Konkrete Kunst, Zurich; FRAC Bourgogne, Dijon; and MAMCO, Geneva; and other galleries and museums. Hafif passed away in 2018 at the age of 88 and was memorialized in an obituary by The New York Times.

Known primarily for her feminist performance art in the late 1960s, Smith’s practice explores themes of spirituality, gender, and power. Like Buchanan, she is also a four-time NEA grantee. Her works are included in the collections of the J. Paul Getty Museum, the Hammer Museum, MOCA, LACMA, and the Art Institute of Chicago. Among her notable recent exhibitions are The 21st Century Odyssey at The Box, Los Angeles; Outside Chance, Andrew Kreps Gallery, New York; Artists and Their Books / Books and Their Artists, the Getty Research Institute, Los Angeles; and Experiments in Electrostatics, Whitney Museum of American Art, New York.

Reservations to the exhibition are currently being accepted through Thursday, Feb. 6. Admission to the Armory is free.

how we are in time and space: Nancy Buchanan, Marcia Hafif, Barbara T. Smith