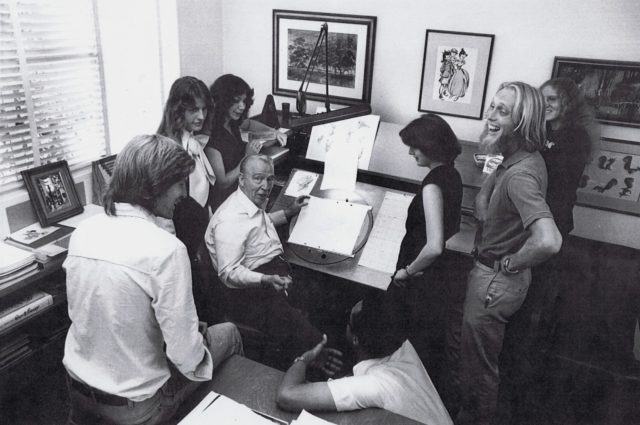 Artist and longtime School of Film/Video faculty member Michael Scroggins invites members of the CalArts community to learn about the Institute’s history through the prism of animated films. This semester, he’s teaching his course CalArts Animation: The Early Years, one last time before his retirement from CalArts.

The Tuesday night online screening and discussion seminar provides an overview of animation made at CalArts during its first few decades, as well as tracks the development of alumnx and faculty artists covered in the course, from Jules Engel and Adam Beckett (Film/Video BFA 73) to Joyce Borenstein (Film/Video MFA 74) and John Musker (Film/Video 77) and beyond.

Scroggins received his MFA from CalArts where he studied video under the tutlelage of artists Nam June Paik and Shuya Abe, with whom he worked on the construction of the historic Paik/Abe Video Synthesizer. He joined the School of Film/Video in 1978, and has exhibited or screened animation works at the Centre George Pompidou in Paris, Union of Filmmakers in Moscow, Seibu Ginza in Tokyo, and the Los Angeles County Museum of Art. More recently, he’s been working on immersive virtual reality projects.

The Spring 2022 schedule for CalArts Animation: The Early Years follows, with confirmed guests in italics. The appearances are subject to change.