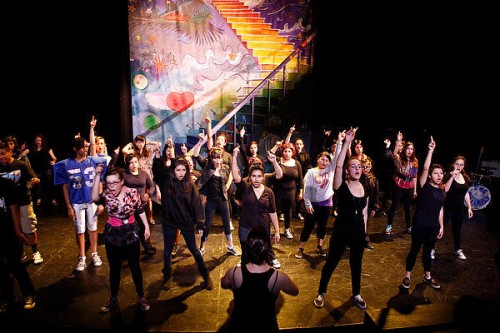 CAP students rehearsal for the play 'Life is a Dream.' | Photo: Scott Groller

This school year, with the suicide of Rutgers University student Tyler Clementi in the news and none other than President Obama speaking out on kids and aggression, the program decided to tackle bullying.

Wilson commented, “This play is timeless and these elements of freedom, acceptance and individuality are still a part of our society today. The lead character, Segismundo, fighting to be something different than what people had labeled him as, was extremely compelling to me. He has the world at his fingertips for a moment, and instead of being kind to his oppressors he treats them as ill as they did him. It is a vicious cycle. The lesson is that we create our own cycles, so we might as well make it a positive ride.”

Life is a Dream—which is directed by BJ Dodge and features choreography by CalArts faculty member Marvin Tunney—has already enjoyed a run at Plaza de la Raza and will close out the CAP program for another year with the final two shows at REDCAT this weekend.

The Accidental Death of Joey by Sue, is Wilson’s feature film directorial debut. Co-written and directed with her friend Neal Thibedeau, and staring Steve Talley (American Pie) and Lin Shaye (There’s Something About Mary), it premiered in NYC at the HBO New York Latino International Film Festival—where Variety called it “stylish and strange enough to mark Sarah Louise Wilson and Neal Thibedeau as helmers to watch.” Sarah’s next film The Scarlet Ibis is in development.