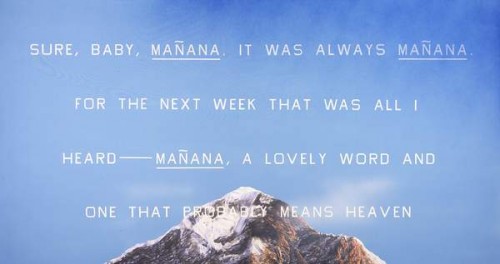 Stories surround Jack Kerouac’s On the Road, a novel inspired by jazz- and drug-fueled road trips with friends. Considered one of the defining works of the Beat Generation, we’ve all heard the legend of how Kerouac supposedly wrote the novel in three weeks in 1951 by typing continuously onto a 120-foot roll of paper.

Now 50 years later, the Hammer Museum brings the past to the forefront by presenting two “great visionaries of art and language”—Kerouac and artist Ed Ruscha (Chouinard 56)—in its exhibit Ed Ruscha on the Road.

In 2009, Ruscha created his own version of the Beat Generation’s Bible, in a limited-edition artist book published by the London-based Gagosian Gallery and Steidl. Kerouac’s text from the book accompanies black-and-white photo illustrations either created by Ruscha, other artists he commissioned or from found images that refer closely to what Kerouac intimated or described.

The book, along with six large paintings on canvas, and 10 drawings will be on exhibit, each borrowing text from On the Road.

Whether painted over snow-capped mountains in Ruscha’s signature all-caps lettering or drawn atop delicately spattered abstract backgrounds, Kerouac’s words provide the artist with a means to explore his own archetypal landscape. Isolating key sentences and phrases from the novel for his paintings and drawings such as “In California you chew the juice out of grapes and spit away the skin, a real luxury,” “the holy con man began to eat,” or “fit and slick as a fiddle,” Ruscha adds another layer of deadpan aesthetic analysis to Kerouac’s original and radical use of language.